There’s a moment in Disney’s musical production of Aladdin which opened in Perth on the weekend where princess Jasmine takes Aladdin’s hand and steps from her palace window onto the magic carpet. They fly up into the stars singing the Alan Menken/Tim Rice classic A Whole New World and for a moment the whole theatre audience flies with them. Thomas Schumancher’s opulent production makes it so easy to suspend disbelief and be swept up in the magical fantasy.

The music included sizzling tunes like Friend Like Me, One Jump Ahead and Arabian Nights from the music/lyrics duo Howard Ashman and Alan Menken (the legendary team behind Beauty and the Beast, The Lion King and The Little Mermaid). There were several additional numbers plus tunes cut from the film including the heartfelt Proud of Your Boy. 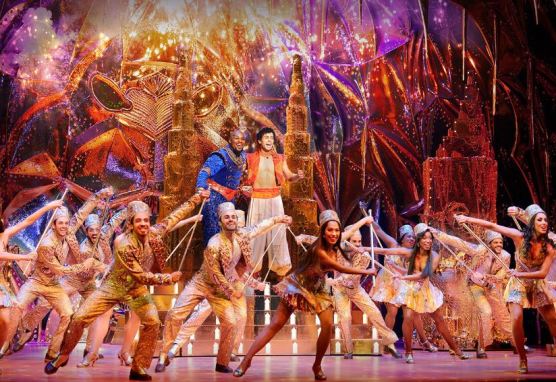 The Friend Like Me routine in the Cave of Wonders

The production (which opened on Broadway in 2014) takes the 1992 Disney film back to its original concept of a musical comedy tribute to the jazz era movies. The character of the Genie was modelled on the 30’s and 40’s jazz greats Fats Waller and Cab Calloway. The show’s centrepiece was an extended version of Friend Like Me which references 42nd Street with a montage of lavish choreographed sequences sampling from the vast history of musicals.

The musical smorgasboard gave plenty of creative opportunity for choreographer Casey Nicholaw whose routines included a heady mix of Mambo, tap, cabaret, salsa, and of course Arabic dance. They were flawlessly executed by an Australian cast whose high energy singing and dancing ensured they weren’t swamped by the extravagant set. The ensemble were both vocally and physically stunning, swathed in Gregg Barne’s eye-popping costumes (over 300 of them!) glittering with Swarovski crystals, exotic fabrics, feather and tassles.

Perth-born, Brisbane-based performer Shubshri Kandiah made her professional debut in the role of princess Jasmine (she took over the role in the final weeks of the Brisbane season in May). In the Friday night preview show Kandiah bubbled with sweet vitality and a certain steeliness – this princess was no one’s fool and she refused to be pawned off by her father to any “Tom, Dick or Hussein.”

Ainsley Melham was an mix of impetuous energy and heart on sleeve naivety as the ‘diamond in the rough’ Aladdin, supported by the hilarious trio of Adam-Jon Fiorentino (Kassim), Troy Sussman (Babkak) and Adam Di Martino (Omar). Anthony Murphy was suitably larger than life and vocally versatile as the Genie who helped Aladdin in his quest to marry the princess. George Henare was the Sultan, torn between the traditions of the past and his progressive daughter. Adam Murphy took the cake vocally with his sinister baritone reaching to falsetto heights as the evil Jaraf, and Aljin Abella earned plenty of laughs as a cackling (human) version of his sidekick Iago the parrot.

They were supported by music director Geoffrey Castles and a dynamic pit band of local musicians who packed plenty of musical punch, particularly the brass section led by Adrian Kelly. Special mention also to illusion designer Jim Steinmeyer – I still can’t work out how that magic carpet flew, not to mention the magic book, pop up food and all the other special effects. Oh and did I mention fireworks?

If it sounds over the top it is. I found the clash of Arabian exoticism and American camp a rich pill to swallow but the show’s robust irreverence makes it work – even the cliched Aussie references to vegemite, tim-tams and Innaloo.

The audience included date night couples, small children, people nostalgically reliving their 90’s childhood and parents of 90’s kids. And the show captivated us all.

Aladdin is a must see, with its moral tale about honesty and keeping promises embedded with high adventure, endearing romance, fabulous music and packaged in the most extravagant stage design you’re likely to see.