A large tortoise plods across the stage while the WA Symphony Orchestra plays a mournful version of the Can-Can. On the tortoise’s back are two children reading books. Next to me my son cranes his neck: “How do they do that?” he wonders aloud, along with everyone else in the capacity audience at the Perth Concert Hall.

The WASO were joined by Spare Parts Puppet Theatre on the weekend for their performances of Saint-Saëns Carnival of the Animals and the ingenuity of the puppet makers had children and parents on the edges of their seats. For the fourth movement of Saint-Saëns’ grand zoological fantasia puppeteers Charlotte Otton and Cam Pollock were wearing a tortoise suit with two stuffed pairs of legs hanging from their torsos, making it look for all the world as though they were sitting on the shell.

Providing the soundtrack was the chamber-sized WASO conducted by Benjamin Northey and supplemented by two pianos but with plenty of room for two chimpanzees to squabble, a swan to glide and even a whale to float above the heads of the musicians. Each animal was introduced by a poem from Nick Enright’s classic Carnival of the Animals book accompanied by miniature model scenarios scattered about the stage. The live action was projected on large screens around the orchestra and mixed with animated video footage. Kudos to the camera, lighting and sound team who coordinated it all seamlessly.

With the sound and lighting team 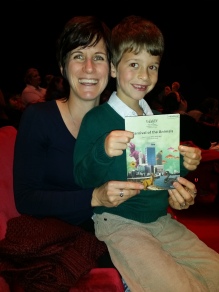 The zoo visits the concert hall

The puppets (Spare Parts director Michael Barlow and designer Leon Hendroff) were a natural extension of Saint Saëns’ evocative music. The shimmering silk fish were a poetic evocation of Saint-Saëns’ rippling piano writing and the dinosaur was a favourite in our family because of “the naughty mouse who was practising xylophone on the dinosaur’s teeth”.

Local scenes helped bring the story closer to home, with shimmering images of the Perth skyline and river accompanying Eve Silver’s expansive cello solo in The Swan; it could’ve been a tourism advertisement. It was a thoughtfully crafted collaboration packed with humour and delight and it held the audience spellbound.

The two Carnival of the Animals shows on Sunday were the conclusion to WASO’s successful Education Week which had included the EChO ensemble with the fabulous Paul Rissmann plus the Composition Project showing and the Rusty Orchestra concert.

WASO’s next kids show will be the cushion concerts in September. Spare Parts’ The Farmer’s Daughter opens June 30th.