The folks at City of Perth Library are celebrating International Women’s Day in style, with an evening of live music, drinks and discussion. 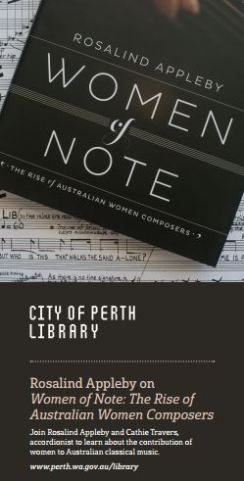 Join Cathie Travers and I on Thursday 8th March as we chat about the unique contribution women composers have made to Australian music history. Cathie will perform her compositions on accordion and there will be limited-edition copies of Women of Note available for purchase.

“All I ever wanted to do would’ve been easier had I been a boy. But never mind, I never paid much attention to it, I just marched in and there I was.”

It will be a beautiful and inspiring way to celebrate remarkable Australian women. Join us as the sun sets over the Swan river for an evening of words, wine and music.

About Women of Note
Women of Note takes a fresh look at history and makes some startling discoveries about the contribution of women to Australian classical music. In the early twentieth century being a female composer was dangerous; one composer was diagnosed as mentally insane by her psychiatrist husband; several achieved success only after their divorces and often the only way to get their music published was to lie about their gender.

About Rosalind Appleby (Author)
Rosalind Appleby has contributed music reviews and feature articles to a variety of national and international publications including London’s Financial Times, The Australian, The West Australian and The Opera Critic. She is the Western Australian correspondent for Limelight magazine and London’s prestigious Opera Magazine. For several years Rosalind produced and broadcast Difficult Listening for community radio.

About Cathie Travers (Composer)
Cathie Travers has worked as a singer, guitarist and keyboard player in rock bands, as well as a classical pianist, avant-garde keyboardist and exponent of digital technologies in music. She is one of the most highly regarded accordionists in Australia. She has featured as composer, performer and music director for numerous theatre and dance works, ensemble and orchestral performances around Australia and internationally.