Skip to content
Date: February 23, 2013Author: Rosalind Appleby 0 Comments
“It’s important for the festival to broker opportunities for people,” says Chris van Tuinen, “that’s what we are here for.” The program manager for the festival’s classical music program has coordinated the combination of the WA Symphony Orchestra and the WA Youth Orchestra into a massive conglomerate orchestra to perform Bartok’s opera Duke Bluebeard’s Castle and ballet suite The Wooden Prince. 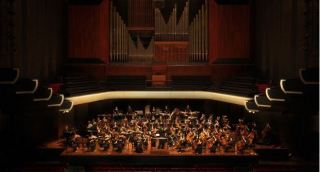 The experience for the youth orchestra members will be immeasurable and Tuinen is quietly proud of his achievement.
“Bluebeard is huge, it requires quintuple winds with 115 players on stage. And no one in Perth has done The Wooden Prince before. Bartok was such a unique composer, perhaps the only one who was able to synthesise the different approaches of the twentieth century.”
The opera and ballet double bill will be presented as a concert performance at the Perth Concert Hall. To manage the undertaking van Tuinen has drawn on contacts from his time as a repetiteur with Opera Australia. English conductor Sir Richard Armstrong, a regular visitor to the east coast since 1985, will make his Perth debut conducting the combined orchestra.

“Richard is just a kid from Leicester who played piano to keep warm and then ended up at the Royal Opera as a repetiteur under Solti,” van Tuinen says. “I love that he’s tough as nails but quietly spoken. He manages the production side of things so well. I couldn’t think of anyone better to do it.”

The seventy year old Armstrong, who has directed both the Welsh and Scottish Opera companies, is delighted to be coming to Perth to conduct the rarely heard repertoire.

“Both scores have an enormous palette of colour. Bartok used the biggest orchestras of his composing life in these pieces. I have never had the opportunity to experience The Wooden Prince live in the theatre, it is so rarely performed still. Perth audiences are so lucky to have this opportunity.”
TheWooden Prince Suite (1914-16) is Bartok’s condensed version of his original ballet, which was a simple fairy tale with a moderately happy ending. In contrast DukeBluebeard (1911) is a deep psychological study showing influences from Strauss, Wagner and Debussy.
Armstrong says he has worked with youth orchestras before and will treat the young players exactly as he would those of greater experience.
“My job is to encourage the best from everybody’s potential. I am most impressed that so many players from the WA Youth Orchestra get to perform works such as these with the WASO…it is the most inspirational way to learn.”
The orchestra will be joined by baritone PeterColeman-Wright singing Duke Bluebeard and soprano Lisa Gasteen as his headstrong wife Judith. Gasteen is returning to the stage after several years break due to injury. The renowned dramatic soprano is based in Queensland where she has established a national opera school. She seldom performs since a nerve injury in her neck in 2008. Performing Bluebeard marks her return to a dramatic role in front of a large orchestra.
Van Tuinen says he lured her to Perth by offering an alternative to the Wagnerian roles she had been singing.

“I knew Lisa was singing again and that she didn’t want to get back into the cycle of endlessly doing the same eight roles.”

For the technically and dramatically complex role of Judith Gasteen will have to draw on the skills that made her one of the world’s most sought after Brunnhilde’s. The opera is sung in Hungarian and is a psychoanalysis of the grisly Bluebeard fairytale.

Van Tuinen has gathered the forces capable of impressive dramatic commitment. Now audiences must prepare for the impact.