Alex Turley has been a compulsive composer since high school and this year he is really hitting his stride. The WA Academy of Performing Arts graduate has had music performed by the Melbourne, WA and Perth Symphony Orchestras, Soundstream Collective, Greywing ensemble and this month Blue Heat is being premiered by Intercurrent Ensemble. Later in the year Alex heads to Hobart for the Tasmanian Symphony Orchestra’s composer’s school but first he stopped by for a chat on Celebrity Soft Spot. 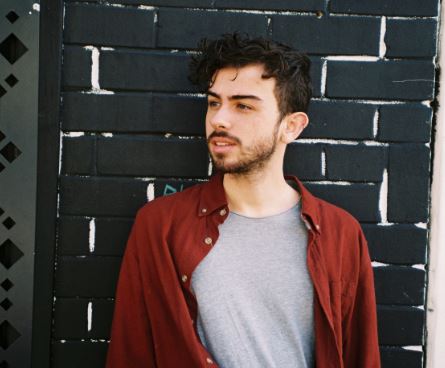 What music gets your heart racing?

I’ve recently become a bit obsessed with horror movie soundtracks. They’re all about using known semiotics and codes, but sometimes they’re just put together really intelligently. Michael Abels’ score for the recent movie Get Out was pretty masterful.

What calms you down?

Carrie and Lowell by Sufjan Stevens or anything by Takemitsu (his music is not necessarily ‘calm’ but it’s very reflective).

What do you sing along to?

Anything from Travelogue by Joni Mitchell or Fleetwood Mac.

Your work Blue Heat is being premiered this month by Intercurrant Ensemble, commissioned by co-co-director Lachlan Skipworth who has also been your composition teacher for the past five years. Intercurrent has a fairly unique instrumentation of percussion, piano and clarinet; how did you go about creating this piece?

What I always look for in an ensemble – and is sometimes tricky to find – is some sense of homogeneity, that everything is working together as part of one machine. The instrumentation of Intercurrent is unique, yes, but at the same time feels very natural to write for. Marimba and clarinet blend well, especially in their lower ranges, and a piano can complement anything. Ashley, Louise and Emily are three of Perth’s most talented musicians, so when I was writing Blue Heat I was conscious of not letting them go to waste. So what I’ve written is really fast and difficult!

What do you hope the audience will experience when they hear it?

The piece is all about exploring energy and motion. I called it Blue Heat for a few reasons, firstly to capture a sense of fire-like energy in the sound, but also because it’s about contradictions. Can something be moving fast but at the same time not really moving at all? Can something be almost inaudible but at the same time intense and exhilarating? It’s quite a visual piece, too – the players throw different melodies to each other, and interact in lots of different ways. At some points everyone comes together and it’s difficult to distinguish which sounds are coming from whom, and at some points the ensemble breaks apart into three separate fields of individual activity. I’m hoping that the audience’s focus will be constantly moving around the ensemble, as that sort of thing makes a piece of music really exhilarating to experience.

Have you established a standard method of composing or is each piece unique?

I certainly have a ‘groove’ that I get into when I’m composing, but I’m still very conscious of not making all of my pieces sound the same. One of the tricky things about learning how to be a composer is finding a balance between having a voice and language that you can claim as uniquely yours, but not churning out the same piece over and over, and I’ve watched many composers fall too far on either side of that spectrum. For me I try and focus each work on a different visual or extra-musical idea (an image, poem or place, for example) that can take the audience into a unique world, but across every work I still have a very ‘Turley’ way of doing things.

Pencil and manuscript or computer?

Honestly, both are equally frustrating. I wish I could just Bluetooth my brain into a computer and write scores telepathically.

You’ve been composing since high school. You made a brave choice in pursuing it for a career; Australia is not renowned for appreciating its own composers! Why did you choose composition?

I caught the bug, unfortunately. In my teenage years I was immersed in a very musical environment, and I became obsessed with deconstructing the language of music, learning as much as I could about how and why everything works the way it does. It’s so mystifying to me how something as mundane as a vibration in the air can produce such intense physical and emotional responses in us. I spent as much time as I could exploring this process, eventually making my own music just as a means of understanding. When I finished school it was a little tempting for me to go and do Law or something nice like that but by that point I had such a deep fascination with music that anything else would have made me quite unhappy. Yes, Australian composers have a very difficult time getting people interested in their music, but I am really determined to make everything work and I’m not going to give up without a fight. There are lots of things that can go alongside composing really nicely – arranging, engraving, conducting, teaching, researching, producing, administrating – so it’s not as if I’m lost for things to do.

You are having a remarkably successful year including wining the Penrith Symphony Orchestras Young Composer Award and being selected for the Tasmanian Symphony Orchestra Composer School, plus upcoming performances of your works in Texas, Mexico City, Brisbane, Sydney and Perth. Where to from here?

I’m still at that point in my life where everything is really new, and I’m just trying to pull things together into some semblance of a freelance career. 2017 for me has been the year that everything has really begun to pick up speed. I’ve got myself to a place where I’m really confident with my craft and my ability to produce good music for people. It’s still a huge rush for me when someone that I barely know from across the country (or in Texas!) is actually interested in what I’m doing and wants to work with me. From here I’m just trying to make as much good music as I can, and I’m trying to diversify as well into areas such as art installation and theatre. There’s lots of stuff in the pipeline!

Listen here to City of Ghosts performed by the Melbourne Symphony Orchestra in 2016.

Mark Applebaum says music should above all else be interesting. What do you think is the most important role of music?

It’s hard to argue with that statement. For me I think music just needs to produce a response – emotional, physical, memory, whatever – and the more intense the response the more powerful the music.

You have a soft spot for saxophone. You’ve composed a Sax Quartet, a Sax Concerto, a work for Sax and piano and another for Sax and cello. What is the appeal of this instrument?

I never set out to write so much for saxophone! It all happened because one of my close friends from uni (David Gioia) is a saxophonist, and he is incredible. I’m completely in awe of how he’s able to paint melody with an astonishing amount of precision and nuance. Together we found that his style of playing was really well suited to my style of writing, so we collaborated on all of those pieces that you just mentioned. We even recorded an album together which will be released in the near future. That kind of ongoing collaboration ended up being very significant in my development as a composer.

Who are your music heroes?

What is your favourite place in Perth?

The beach near my old house, lovely place to take my dogs at sunset!

Do you have a soft spot for anything else in life or is it all about the music?

I love taking photos, I’m also a huge fan of visual art and theatre, I’ve recently become quite obsessed with architecture, I travel as much as I can afford to, I try and keep up to date with feminism, I’m obsessed with interior design… the list goes on! I also work in a fancy-ish restaurant and I actually really enjoy it (weird, I know).

Thank you Alex Turley for participating in the Celebrity Soft Spot series. You can read an interview with Alex here at CutCommon mag and listen to a Making Waves podcast here. For more details about Alex and his work go to alexturley.com. Future performances:

29th August: World premiere of Blue Heat by Intercurrent, State Theatre Centre. Program also includes works by Julian Day, Chris Tonkin, Hannah Lash and Philip Glass.2 Sep: Between the Ocean and the Sky performed by Jonathan Thompson, a PhD oboist from Texas who has commissioned composers from all over the world via the internet. 10 Sep: New Commission (piano duet) performed by Liam Viney and Anna Grinberg, Queensland Art Gallery. This is a part of a concert series called ARGO that seeks to take classical music out of the concert hall and into interactive spaces. They are playing the piece from either sides of an indoor lake.28 Oct: New Commission (orchestra) performed by the Penrith Symphony Orchestra in Sydney as part of the Young Composer Award.