Congratulations Peggy Glanville-Hicks on the premiere this Sunday of the first complete recording of Sappho!!! 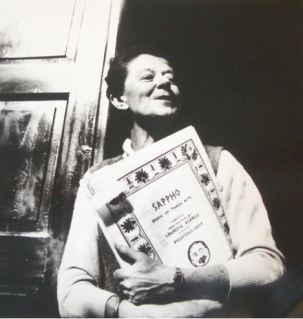 I can imagine you on your Greek island in the sixties as you researched and wrote it. I wonder if you ever imagined it would have its world premiere in Lisbon in 2012? And that it would be conducted by a Australian female conductor?

Sappho was commissioned by the San Francisco Opera when Peggy was at the height of her career. The world had just witnessed the triumph of Nausicaa premiered 1961 in Athens and rumour was that Maria Callas would make her comeback as a soprano in Sappho. But the finished work was rejected by the opera house and the work was never premiered. Two years later Peggy was diagnosed with a brain tumour and despite successful operations she never composed again.

Parts of Sappho have been recorded the entire opera had not been performed in public until earlier this year. 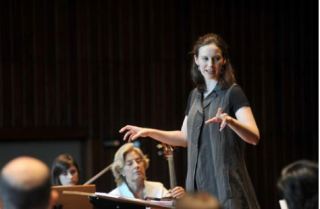 And I’m so glad ABC classic FM got in on the action and snapped up broadcast rights. Tune in on Sunday Nov 4th at 7pm for the first ever broadcast of this amazing piece. Deborah Polaski sings the title role. The synopsis is here (libretto by Lawrence Durrell with original text by Sappho 630 BC).

For more details the project has its own website www.sappho.com.au.